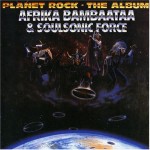 Today’s jam takes us all the way back to 1982, when Afrika Bambaataa & the Soulsonic Force dropped Planet Rock.

Before he became known as “The Amen Ra of Universal Hip Hop Culture”, Bambaataa was a member of Savage Seven (later called the Black Spades), a street gang in the south Bronx. He was born Kevin Donovan but changed his name and his life after a trip to Africa. According to most sources, that was then when he decide to use hip hop to draw kids out of gangs.

Bambaataa became popular street DJ who formed two rap crews, the Jazzy 5 and Soulsonic Force. The group featured a live band but in 1982 they dropped it and went techno. With the help of producer Arthur Baker’s beat box rhythm and synthesizer player John Robie’s keyboard hook, Planet Rock was born.

To this day, Planet Rock is Bambaataa’s biggest hit. Its funky electronic rhythms are infectious and I have witnessed them cause spontaneous break dancing at parties. So before you watch this video you might want to move the future and hid and breakable objects.