Note: I started working on this after the Alton Sterling shooting but before the Philando Castile shooting in St. Paul and attack on the police officers in Dallas. If you want to skip my rant just go right to the “What you can do section.”

Another day, another questionable police shooting. Now it goes without saying that we still don’t have all the facts and the officers deserve a chance to defend their actions, but I’m not here to discuss whether or not the shootings were justified. I’m here to talk about the responses that we have heard and sadly will continue to hear.

I also want to offer up some tips for people who are tired of thoughts, prayers, protests and hashtags.

White people (specifically the ones who like to shout “All Lives Matter” and think that race is not a factor), I’m going to talk to you first.

all houses matter: the extended cut comic by Kris Straub

No one is saying the white lives or cops’ lives don’t matter. They are saying the “black lives matter, too.”

Even though people like to claim that we are in a post-racial world, you have to realize that racism still exists. Lynching, fire hoses and dogs aren’t involved this time, but it is still racism. The issue isn’t that we think black criminals should get a pass. Black people commit crimes just like whites, Hispanics, Asians and every other race on the planet. If Martians ever come to our planet, some of them will be criminals, too.

The issue is in how those crimes are handled. How blacks are apprehended versus whites. The legal system is supposed to be “innocent until proven guilty.” If you are black, you are guilty until proven innocent. And on top of that, in most of these cases, a dead black person has to prove that they weren’t doing anything wrong when the authorities approached. I am pretty sure it is hard to testify from the afterlife, so it’s the word of the shooter against the word of a guy who can’t speak for himself.

In South Carolina, Michael Slager shot a fleeing suspect multiple times in the back, then lied about him taking his Taser and trying to administer CPR. And if it weren’t for an eyewitness video that surfaced later, he would have gotten away with it.

Charleston church shooter Dylann Roof was captured without incident, and they were even nice enough to get him a hamburger while he was in custody.

Then, we have the Bundy men who could rightfully be called “domestic terrorists.” In 2014, Cliven Bundy was part of a “protest” that included blocking a portion of an interstate highway, having physical confrontation with federal and local authorities, aiming guns at authorities in the area, yelling and waving guns in the face of an assistant sheriff and (allegedly) assaulting officers, including a police dog. He even had a long list of demands. The dude was a couple of henchmen and a laser cannon away from being a Bond villain, and the authorities handled it peacefully. Las Vegas police didn’t even wear protective gear because it might provoke the protesters.

Proving that the apple doesn’t fall from the tree, Ammon Bundy and a group of “protesters” took over the Malheur National Wildlife Refuge and demanded the release of two federal prisoners and for the government to relinquish control of Malheur National Forest. One of their leaders told The Washington Post that the buildings “will never, ever return to the federal government.” Keep in mind that they were armed, started driving vehicles stolen from the property and one of their supporters threatened a “bloody, brutal civil war” if the government tried to take it back.

Of course that never happened because the authorities decided to wait that one out. Hell the “protestors” were even allowed to come and go as they pleased at one point during their occupation.

Let’s not forget the case that many say started it all, the shooting of Trayvon Martin. It wasn’t a police shooting, but it set the groundwork for much of what we are going through right now.

The racism came into play when the cops showed up and the investigation started.

When Zimmerman said Martin attacked him, everyone just took it at face value. Surely the unarmed, black teen carrying Skittles and tea was up to no good. And even if he wasn’t doing anything wrong, why did he run from the random guy following him with a gun? And sure he probably felt like he was being attacked and had a right to defend himself (you know “stand his ground”), but that doesn’t really apply to him. Oh, and he wasn’t an honor roll student with a spotless record. Yup, that’s all the proof they needed. He deserved to die and “open season” on black men truly kicked off. 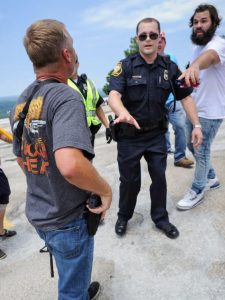 AP Photo from a Confederate flag rally in Stone Mountain in Georgia. That’s an attendee reaching for his weapon.

There are numerous other examples like John Crawford (shot while holding a toy gun at Walmart), Eric Garner (choked out for selling loose cigarettes) and Tamir Rice (shot while playing with a BB gun in a park). There have been more than 100 shootings in 2016 alone.

People who are against this movement have done a great job of changing the narrative. #BlackLivesMatter became “no other lives matter” and “go kill cops” the same way transgender people became sexual predators you can’t trust in the bathroom. Just like Occupy Wall Street went from “corporations have more say in our government than voters” to “the government should give us free stuff.” Just like gays went from “we just want basic rights” to “they are just a bunch of pedophiles who want to adopt children to molest.” It’s even how Jesse Williams’s speech about police brutality and equality turned into a racist tirade that he should be fired for.

It is an evil masterpiece.

Cops have a hard job and not all of them are bad. We know this. I’d say 90% of them are out there fighting the good fight and trying to make a difference. The problem is that other 10%. To borrow a line from John Stewart, “you are only as good as your lowest common denominator.” When a cop gets away with killing someone, it makes all of them look bad. And more importantly, it makes their jobs exponentially more difficult.

Pointing out a flawed system is not racist. There is no call to shoot white people instead of black people. I’ve never heard anyone say black people deserve special anti-shooting privileges. If I’m flying a plane and I need to make an emergency landing immediately because there is a fire or I’m out of fuel, the control tower isn’t going to make me wait and say “all planes matter.” They are going to work to get me on the ground as quickly and safely as possible. That’s basically what #BlackLivesMatter wants.

No one wants cops hurt. We do want them held accountable. They have a difficult job, but they need to be punished when they mess up. It’s not anti-cop; it’s anti-cops shooting people unnecessarily and getting away with it. Pointing out that fact doesn’t make someone a racist. It makes them someone who expects the best from people who have sworn to protect them.

Like I said earlier, black folks commit crimes. No one is arguing that. But is it too much to ask that when all things are equal, you go after black, white and other criminals with the same force?

Black folks, you’re next. Bring it in.

I say this because we are going to need white people on our side to get things changed. A few white people helped with the Underground Railroad. Some marched with Martin Luther King. We are strong, but we still need allies.

Our anger needs to be focused on people who can actually make changes. Our speeches and posts need to be specific. We aren’t anti-white people or anti-law enforcement, we are anti-cops killing people who maybe shouldn’t have been killed. Yelling at every white person you see and busting in on events that probably don’t need to be busted in on won’t help.

Since this is a long run, one of the most important things we can do is build for the future. We need more minorities in the justice system. Not to turn a blind eye when we commit crimes, but to make sure we get fair treatment when we do and see that the right people go to jail. So talk to your kids about becoming lawyers, police officers, judges and politicians (the good kind). If you don’t have kids and are looking for a new career, consider doing it yourself. It won’t be easy, but it will be worth it.

Most importantly of all, we need to stay calm and make sure others do, too. Of course we want to fight back, but shooting cops and verbally assaulting white people aren’t going to help. When you try to fight violence with more violence, everyone loses something and/or someone. And to be honest, we aren’t going to win a shootout with them. They don’t just have guns, they have an entire SYSTEM behind them and that is tough to beat head on.

What everyone can do

We need to show that we are willing to do more than protest. Our elected officials need to help address this issue. If they don’t, then vote them out. Once they feel like their jobs are in jeopardy, they will start to care. Find your state and national representatives’ contact info, then call, fax, email and tweet until your hands get tired. Then, get your friends and family to do it. We are dealing with people who count on us to have short memories. They know that if they can make it for a year or two after a major event, we’ll forget about it. So let them know we aren’t forgetting.

If you want to be more hands on, find out if your city has a Civilian Review Board that allows residents to “participate to some degree in overseeing their local law enforcement agencies.” If they have one, join it. If they don’t, work with your local officials to get one started. Find organizations that deal with police accountability (make sure they are legit) then join, start a local chapter or just donate a couple of bucks.

There are good cops out there who need our support and are thankful for it.  The families of fallen ones do, too. Consider donating money or time to one of the many law enforcement charities out there. As always, there are good ones and bad ones, so do your homework.

Everyone, black, white and other, needs to take a step back and realize that pro-black doesn’t mean anti-white or anti-cop. It is possible to respect what the good cops are doing while demanding justice for the ones who are giving them a bad name. Racism is still an issue in this country, and the sooner everyone admits that the better.