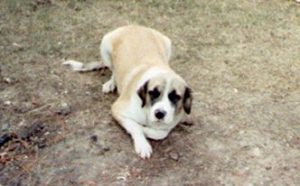 My old dog, Prince. 120 pounds of slobber and fur.

Since today is National Dog Day I want to do something special for man’s best friend. I’ve have always liked dogs (sometimes more than people) for me this is a day worth celebrating.

The song I’m featuring today needs little introduction. If you are a fan of funk you know it well and if you know me then you know that this is my favorite song ever.

When George Clinton released Computer Games back in 1982, he blessed the world with a song called Atomic Dog. According to one website, Clinton admits to being in an enhanced state when he recorded it. Translation: He was high. I believe it.

This song has a great beat, simple yet off the wall lyrics and makes for a great party and/or workout song. To put it another way, 100 Proof loves Atomic Dog.

My only complaint is that it is the “unofficial official” song of Omega Psi Phi Fraternity, Inc. (a.k.a. the Que Dogs) so I have to watch how I act when it is playing. I can’t have people thinking that I am copying or mocking a frat. These young cats nowadays want fight at the drop of a hat and I don’t want to give them a reason. It’s a shame because I was in hooked on this song long before I knew what a Que Dog was.

FYI if you are ever at a party and this song starts playing check your left and your right because chances are a line of Ques are coming and they don’t stop stepping for anyone.

This song has been sampled numerous times by artists like MC Hammer, Snoop Dogg, Dr. Dre, Bow Wow, Ice Cube and others.

You don’t have to love it, but if you don’t like it get yourself checked. Now put on your brightly colored wig, and get ready to “Do the dogcatcher, baby, do the dogcatcher. Ooh!”