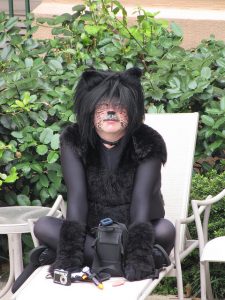 You never know who you will see poolside at DragonCon

My second trip to Dragon*Con was an eventful one to say the least. Here are a few lessons I learned during the annual event in Atlanta.

It’s more than comic books. Dragon*Con is pretty much all things geeky. There are battling robots, classic cartoons panels, reviews of recent science fiction movies like G.I. Joe: Rise of Cobra and Star Trek. There is also a pop culture element. Dukes of Hazard and The A-Team wouldn’t be considered true sci-fi but they were represented.

Always go and see Spike.  I was never watched much of Buffy The Vampire Slayer but I went with a friend to see James Marsters a.k.a. Spike. I have to admit, he is a very entertaining guy. He has lots of funny stories about Hollywood and his life in general. I did hate that even though he is listed at 5’10” he talks about how short he felt short on the set on Angel. Other than that he is a fun guy and I if you have a chance to see him in person do it. 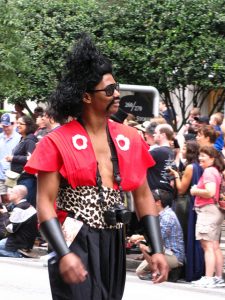 Sho’nuff the Shogun of Harlem marches in the parade

In a society where women are demonized for showing a little bit of skin or considered “fat” because there aren’t a size 6 it’s nice to see a place where you can wear almost anything and not be judged.  Not all men have size pack abs and buns of steel. At Dragon*Con for every ripped Spartan or Mexican wrestler you will see one slightly out of shape warrior or a leather clad biker.

Greeks are sexy. Some call it guts. Some call it testicular fortitude. Whatever it is, geeks have it. So, if you think that self confidence is sexy, Dragon*Con is the perfect place to find a mate.

Think about it, you have to have a certain level of self-confidence to wear some of those outfits. I know smoking hot women that don’t have the nerve to pull off Darth Vader in lingerie or Poison Ivy.  And I can promise you that I will have to hit the gym for a couple of years before I am physically and mentally ready to dress up as man in a towel.

It gives you a chance to be young again. Let’s face it, life is hard. There is nothing fun about bills, wars, death, taxes and all the other stuff we adults have to face. Dragon*Con attendees get a chance to be a kid again. My return to childhood began Sunday morning in the lobby of the Marriott. 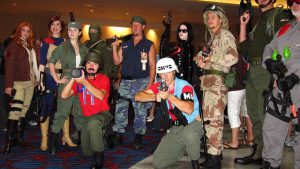 While I was walking to a panel, I noticed to people in the lobby dressed as characters from the old G.I. Joe cartoon. I managed to defy all laws of nature and age backward. I transformed from a 32 year-old man to an eight-year-old boy.

All I needed was some footie pajamas and a bowl of cereal.

You never know who (or what) you will see. Where else can you see a mermaid in your hotel swimming pool, ride an elevator with Cobra Commander, party with a Disco Trooper, see Chewbacca get groped on the dance floor, get a drink from a robot and find Jesus?

That is the recipe for a wild night.