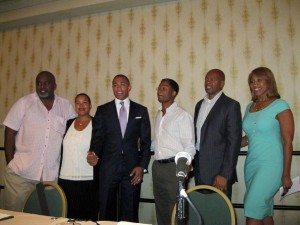 Convention goers who are interested in a career in the entertainment industry got advice from a panel of experts.

According to Elie, since there are more channels, successful shows can be targeted to smaller groups. Also there are more opportunities for African-Americans in the industry but there’s not the explosion of jobs that people think.

There are few black men in the industry on the corporate side.

When about about transitioning from journalism Elie said that it is a different skill set and there are people with more experience ahead of you. He also mentioned that his case was not a typical one and his experience working in New Orleans helped.

Elie also mentioned that it’s not an easy transition because it’s a “different skill set and there are people with more experience ahead of you.” Despite this, journalists who want to change shouldn’t be discouraged because they are “storytellers.”

If you want to get a job in entertainment, Tim Mcneal recommends that you are were the entertainment jobs are (Los Angeles, etc.)