It’s the weekend so why not head down to your favorite and try something new? Enjoy this drink responsibly.

If this drink were a movie, it would be: The Bourne Identity 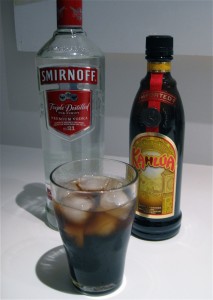 The story: Most accounts agree the Black Russian first appeared during the early Cold War years in Brussels, Belgium, the same country that brought you Jean-Claude Van Damme and ridiculously thick waffles. It’s tempting to say this dark, complex-tasting drink packs a punch like the Muscles from Brussels, but that’d be too easy. It’s really more like Jason Bourne — throw back one too many, and you’ll forget your name.

Who drinks it? People who go their own way. There are lots of reasons to try a Black Russian. It’s a little mysterious, so you can be, too. It’s only got two ingredients, so it’s hard to mess up. No bright colors or tiny umbrellas to draw the wrong kind of attention to yourself. And its name sounds like a vintage Bond villain.

Bottom line: A Black Russian combines dark and clear liquors. If you follow the rules of drinking, this is a no-no. But the greatest minds of medical science can’t agree on whether that’s fact or superstition. Here’s your chance to find out, tough guy.

Also, if you don’t do Starbucks, avoid Black Russians. The vodka mutes the coffee taste some, but you’ll know it’s there.

How to make one: Black Russians are very simple, thus good for home mixing or ordering at a crowded bar. Here’s the official International Bartenders Association recipe.

Pour the ingredients into an old-fashioned glass filled with ice cubes. Stir gently.

Posted in After Work and tagged drinks.