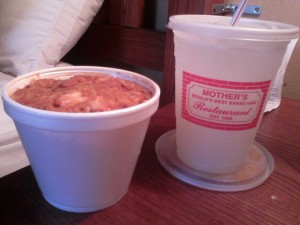 Now that I’ve had a couple of weeks to digest everything that went down in New Orleans during The National Association of Black Journalists conference I figure this would be a good time to share a few highlights.  Here’s a look at what went down during the panels a.k.a. the daylight hours.

The gods must have been smiling down on me that day because I avoided two potentially long lines. Registration was a breeze this year. I honestly think I was in an out in five minutes. I arrived in New Orleans around lunch time so I went to Mother’s Restaurant for some real jambalaya. I left with my food just as the lunch line that wraps around the building was starting to form.

I was more than a little excited about the Putting Your Journalism Skills to Work in Hollywood panel (#jholly). As a kid I wanted to be an actor, I have a friend with a degree in screen writing and starting a small production company is on my “I think I would be good at this” list so I was really interested in hearing with the panel had to say. You can see a more complete review here but I can honestly say that this set the tone for the rest of the panels I attended. 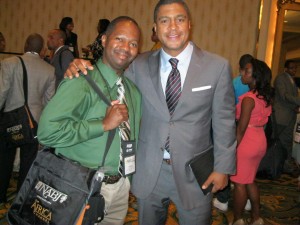 Two of Louisiana’s greatest exports. Me and Stan Verett

My respect for ESPN’s Jemele Hill grows every time I hear her speak. She offered up some really good advice during the Sports Task Force Mentor Breakfast. Her willingness to share what she did wrong in addition to what she did right was refreshing. Stan Verett, the featured speaker and unofficial king of New Orleans for the week, was inspirational. He reminded young journalists about the value of hard work (“You’re gonna have to do it.”) and offered some inspiration for those still struggling to “make it.” (“If you are underpaid now and doing a lot of work you are on the right track.”

For me the biggest take away from his speech were his comments on new media and changing technology. Verett reminded everyone in the room that it’s “the same info being consumed in a different way.” I’m an online guy who has been preaching this for years so it’s nice to know that I am on the right track.

Data Visualization on the Cheap (#dataviz) was heaven for a geek like me. It was a small group but I came away with some useful tools. I started playing around with Google Fusion Table about a week before the conference and seeing some real world examples of what it can do was a big help.

I try to attend panels outside of my field and this year, “Pitch Me with Your Best Shot” (#PRPITCH) was my choice. The session was packed because they assembled an all-star panel. People in attendance could get tips on pitching stories to national media from: 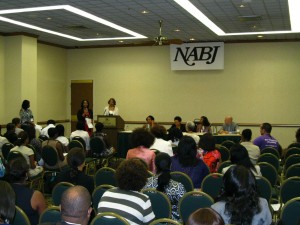 I was also impressed with moderators Kim Barakian and Gabrielle M. Lee. They kept everything moving smoothly.

Due to a career change, I have been away from the NABJ’s Digital Journalism Task Force so Friday’s meeting was an opportunity for me to (re)connect with like minded folks. I was part of one of the groups’ first meetings in Chicago and I am happy to see how it has grown over the years.  DJTF is not on the Sports Task Forces’ level yet but they are definitely a major part of the convention.

I appeased my geek side some more during The Gamification of News (#gamenews) panel. I don’t think you are going to see a lot of journalists developing games to help get news out but there are a few situations where it could work. That’s a different blog for a different day.

The Intersection of PR and Technology (#prtech) panel was a great source of tools for anyone wanting to get their message out and tips on how to properly use them. I think one of my favorite quotes was “Twitter is the world’s greatest cocktail party.” It’s it one of the best descriptions of the service and it underscored the point that you should not shout at people online, you should engage them. It’s a lesson that journalists and PR people tend to forget.

New Media, Old Problems (#medprob) was entertaining and informative.  Anytime you have a chance to attend a panel that features Bomani Jones, do it. You may not agree with all his opinions but you will respect him for giving them and sometimes being hilarious in the process.  There weren’t a lot of answers but people left with a few things to think about and a few things that they could do differently.  It also produced the hands down winner for most poorly thought out comment from a panelist.

All in all I was impressed with this year’s selection of panels. There were a few hiccups here and there but I can honestly say that I came away from all of them with something. Now if I can just figure out how to get on a panel next year I’ll be in a good shape.

Posted in NABJ and tagged NABJ12.