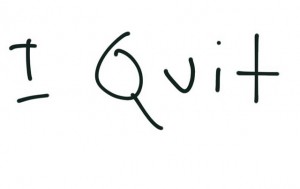 A week ago I walked into my assistant manager’s office and told him I was putting in my two weeks’ notice. I actually like the guy so I wanted to give him a heads up before I sent the email to the higher ups. I’m not leaving for any bad reasons and no bridges are being burned, it was just time for a change.

Ideally I would have had a new job lined up when I did it but we do not live in an ideal world. There is a big project coming in a little over a month and I wanted to leave before then. Not because I don’t want to be there for it, I just want them to have a chance to fill my position. I knew if I stayed until I had something locked up I would end up leaving right before or in the middle of it. That’s what happens when you make the mistake of liking the people you work with.

When I walked in Monday my heart was going a mile a minute. People quit their jobs all the time so I knew I wasn’t doing anything special.  It was however, a very uncharacteristic showing of confidence from me. I get complacent easy and sometimes “roll with the punches” too much. So when it was all said and done I was deep in the “I can’t believe I just did that” zone.

Like I said earlier, I am not leaving for “bad reasons.” I actually like the people I work with and my company has some benefits that I couldn’t get in most places. That will be tough to leave behind. I consider a few of the people there close friends. I felt like I was starting to make a name for myself. I enjoyed going to conferences seeing people I recognized. I hit a point where I felt like I had become fairly knowledgeable about my field so I felt comfortable sharing ideas with them. Some of them were even good ones.
That is a lot to walk away from. You always say you’ll keep in touch with coworkers but that never really works out. I’ll miss my conference friends. Plus, any new job I start will probably be in a different industry so in some ways I’ll be starting from scratch.

Even though I am leaving on good terms, the fact that I have to leave upsets me.  I was more mad at myself than anyone else. I couldn’t understand how things got so far off track in roughly a year. I was also mad that I saw the train coming at me but I stayed on the tracks anyway. There were times when I took some losses I shouldn’t have just for the sake of ending disagreement with coworkers. Maybe if I had spoken up about a few things I wouldn’t have been painted into a corner.
So yeah, I am more than a little upset that it got to this point.

I am not trying to sound like a badass but there’s not a lot I am afraid of. My biggest fears are more mental than physical. Big mean dogs? No problem. Getting old? Scared as a kid at his first horror movie.

A change this big can be frightening. Especially when you don’t have a new job locked up. I can do many things but selling myself isn’t one of them so job hunting has also been a problem for me. So has dating but that is a different blog for a different day.
Going out into the great unknown is scarier than any big mean dog or horror movie.

I don’t regret my overall decision to leave. That is something that needed to happen. I will regret not seeing a few things through. I regret that I won’t be part of the big changes that are happening at the place I’m leaving. In a year or two it will be something that everyone involved in will be able to look back on and say they were part it. They helped build something great. That has always been important to me so missing out will suck.

All those emotions happened the first week I turned in my notice. I still have two weeks left so I can only imagine what feelings I am going to have to deal with during that time.

I feel like I am in a situation that has no middle ground. This will either be a huge success or a spectacular failure. A year from now I’ll look back on this as the decisions that turned my professional life around or the reason I am back at home living with my parents. Thankfully they haven’t turned my old room into a home gym.

Posted in On the Job and tagged iquit, iquitmyjob, Operation Don't End Up Homeless.