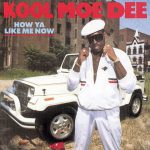 Today I am featuring a song that will make you want to bust someone in the jaw.

In 1998 Kool Moe Dee released How Ya Like Me Now, his second album. The album featured a track called Wild Wild West. Any song that advocates knocking someone out instead of shooting them is ok by me.

So break out your cowboy hat, spurs, lassos and/or whips and take a trip to the Wild Wild West.

And you all better not act like you don’t have spurs and whips in your bedrooms. I know how some of y’all get down.